Big Fire Law & Policy Group LLP is seeking candidates with 7-10 years of litigation experience to join our metropolitan Omaha, Nebraska office.  The right candidate will have the opportunity to work on cases in a variety of areas including constitutional law, environmental law, real estate, employment, tax issues, corporate/business matters, and complex federal, state and tribal court litigation at both trial and appellate levels.

Benefits:
Big Fire Law & Policy Group’s mission is to provide excellent legal services and an outstanding client experience, balanced with a work atmosphere that promotes individual betterment and professional exceptionalism. We build incredible trust with our clients by encouraging our attorneys to be the best at what they do, and to do so in the best possible way. 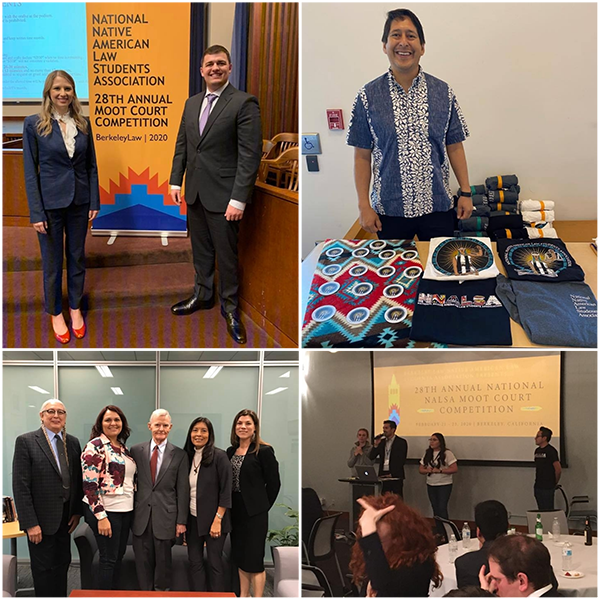 From Feb. 21 to 23, Blair Tarman (2L) and Dylan West (2L) participated in NNALSA’s Moot Court Competition in UC Berkeley. Coached by Torey Dolan (’19), the duo advanced to the 16th round, beating out 54 teams to become the 11th seed. They did an amazing job!

West said he and Tarman put many hours of efforts in to prepare for the competition in order to represent ASU Law well. Although it did take a lot of work to go to the competition, he learned a lot from the experience that he will carry into his studies and future career.

“The amount of work required to compete can appear daunting at first, but the results far exceeded the cost,” said West. “The experience of advocating before a panel against an adverse party is always useful experience no matter which field of law you go into, and the experience left me with a much firmer understanding of Federal Indian Law and a passion for oral advocacy.” 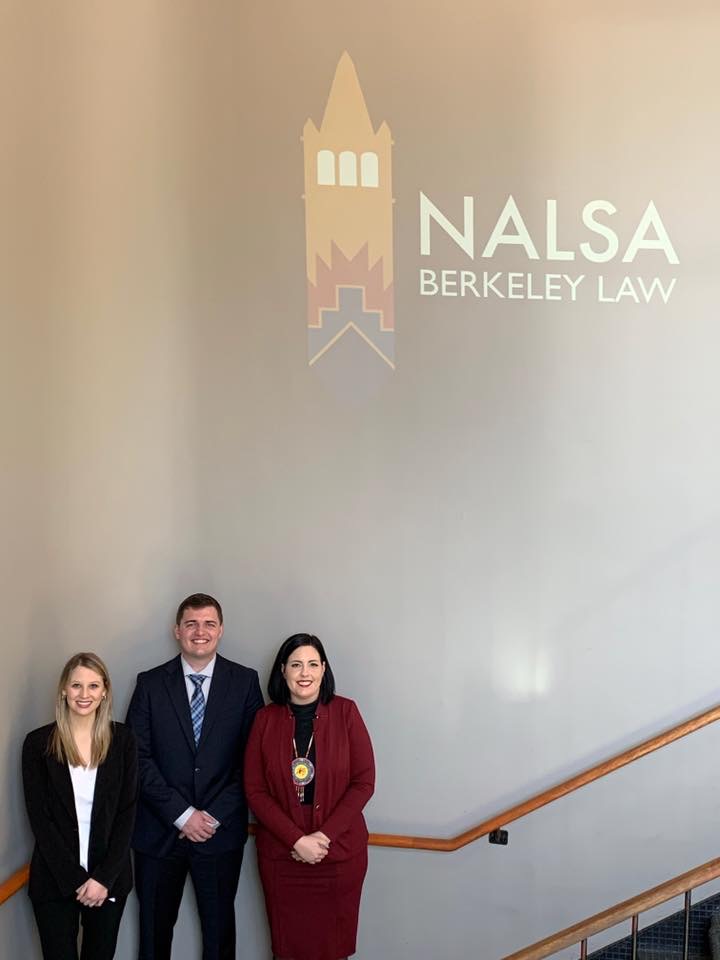 Thank you for participating! 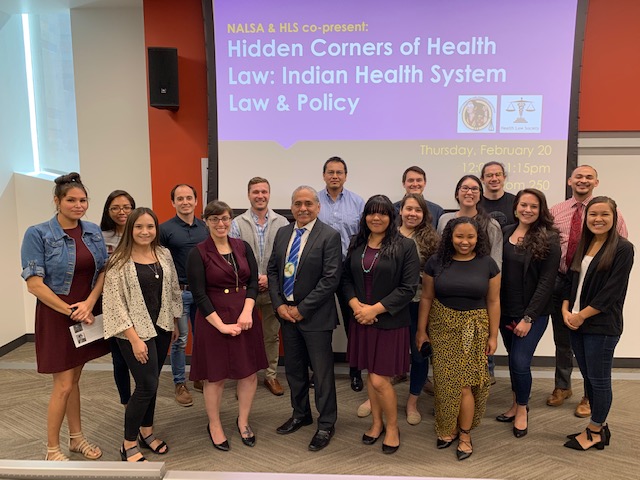 ASU NALSA and ASU Health Law Society welcomed Dr. John Molina (’05) and Aila Hoss to speak on a panel on Indian health law and policy. Thank you for sharing your knowledge!

About the Center for Native American Youth at the Aspen Institute The Center for Native American Youth (CNAY) believes all Native American youth should lead full and healthy lives, have equal access to opportunity, and draw strength from their culture and inspire one another. As a policy program of the Aspen Institute founded by former U.S. Senator Byron Dorgan (ret.), we work to improve the health, safety, and overall well-being of Native American youth ages 18-24, with special emphasis on youth suicide prevention. We do this through youth recognition and leadership development, research, advocacy, and policy change; Native youth program capacity building; and by connecting Native youth with strengths-based media. We strive to bring greater national attention to the issues facing Native American youth while fostering community-driven solutions. The program, and this position, is based in Washington, DC.

Job Summary:
CNAY is seeking an Executive Director to lead a dynamic and impactful Native American youth leadership development and advocacy organization who can build on its successful growth since its founding in 2011. The candidate must have a very strong understanding of Native American policy issues and deep relationships with tribal communities, tribal leaders, and tribal nonprofit leaders. This position requires a strategic thinker who can work closely with youth and community stakeholders to design programs driven by their vision and rooted in their cultural values, while leveraging the wide resources and expertise of a large organization that is a global leader in the fields of leadership development, policy, and action. In addition to leading the strategic positioning and growth of CNAY’s programs, the Executive Director will manage a staff of 5 people and oversee all finance and operational responsibilities for the program. The Executive Director is also responsible for raising funds and other resources for the program, which is an essential part of the job. Finally, the ideal candidate will be the key external representative for the organization and possess strong writing and speaking ability that will raise the profile of CNAY to funders, elected officials, thought leaders, and other key stakeholders. 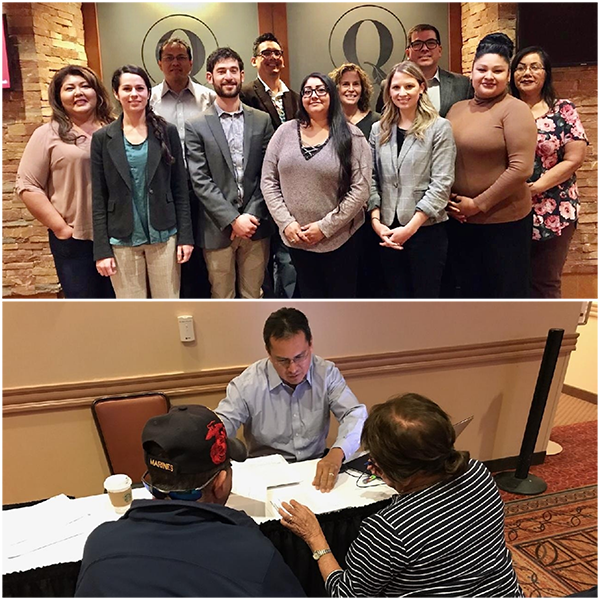 Kris Beecher (3L), Blair Tarman (2L), and Irvin Williams (3L) worked with ILP alumni to present the Quechan Wills Clinic on Feb. 28 and 29. The Wills Clinic, led by Faculty Associate Helen Burtis (’08), was part of this semester’s Indian Legal Clinic’s course. The student attorneys met with Quechan Indian Tribe members individually to discuss the member’s estate planning needs. Each student attorney then drafted a member’s will, which was executed the next day. Jim Palmer, Jr. (’04), Simon Gertler (’18) and Margaret Hirchak  (’12), all ILP alumni and attorneys at Rosette, LLP, provided supervision and mentorship to the students and also provided estate planning services to Tribal members.

Thanks to the Wills Clinic at ASU Law’s Indian Legal Clinic, 14 members received wills that covered their allotments, trust personalty and other non-trust property. 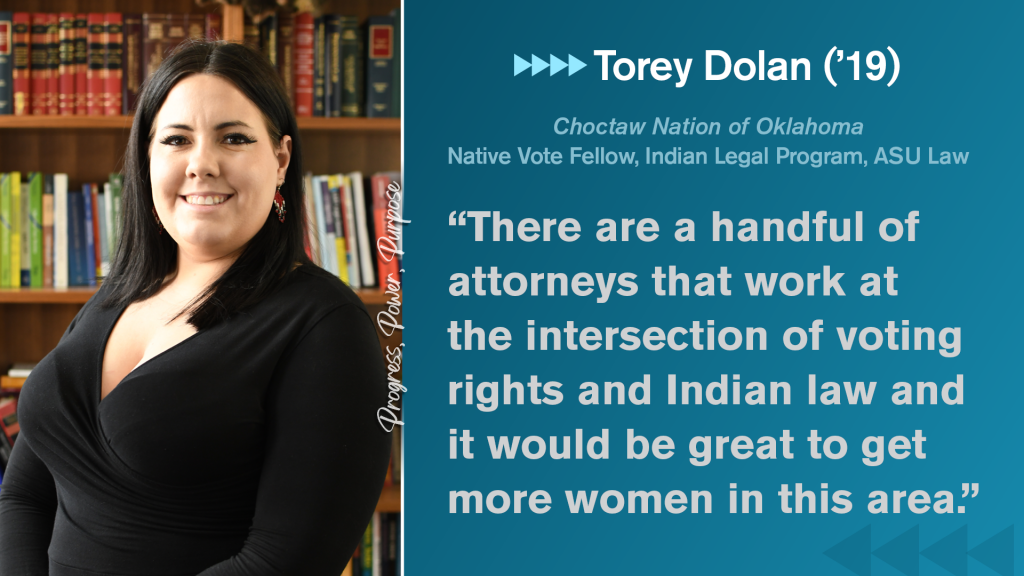 In celebrating “Women’s History Month,” we turned to some of the women of the ILP to shed light on Native women legal professionals and advocates in this Progress, Power, Purpose series. This brilliant Choctaw woman is a great advocate for all things Native Vote and an asset to the program, especially the Indian Legal Clinic. Here Torey reflects on her law school memories and the meaning of her work.

Q: Were you always interested in this kind of work?
A: No. I’ve always been interested in Civil Rights, but never thought about issues related to voting rights. It wasn’t until I was a student in the ASU Indian Legal Clinic working on the Arizona Native Vote Election Protection Project that I realized this is an ongoing area of civil rights struggle that needs attention. It was then I became passionate about the work.

Q: What advice do you have for Native American women who want to work in this area?
A: Just do it! There are a handful of attorneys that work at the intersection of voting rights and Indian law and it would be great to get more women in this area. Start by networking and reaching out.

Q: What is your proudest career moment?
A: On election day, through our hotline and our volunteers we learned that polling locations on the Navajo Nation did not open on time and was opened an hour late. During election day, we worked on preparing a case along with the ACLU to go to court to keep the polls open longer at the end of the day to make up for lost time. We successfully got the court order. When a voter went to vote during the extended hour the poll workers attempted to turn her away, but our volunteer encouraged her to stay as she called the hotline. I answered the hotline call and explained to the voter that she had the right to vote because of the court order. We stayed on the phone talking to the voter and poll worker, alerted the Navajo Nation Department of Justice, the Secretary of State, and the Apache County Election’s Department. We were adamant. Ultimately, the county got in touch with the poll workers and the county instructed them to let the voter cast a ballot. It was a day’s worth of work to get the court order and because of our volunteers, our team, and our efforts we were able to ensure that person voted.

Q: Is there anything you’ve learned after graduating that you wished you learned in class?
A: I wish I had learned more about counseling Tribal clients when it comes to deciding when to file a lawsuit and when to pursue other diplomatic channels to solve disputes. As Native people, we know that you can be right on the law and still lose in court due to bias. Tribal governments must balance a lot of factors when deciding whether to pursue legal action, so I wish I had more experience in addressing those various concerns before graduating.

Q: What is the most valuable lesson you learned in the classroom that has helped you in your career?
A: I’m very grateful that my Indian Law professors repeatedly emphasized the nature of jurisdiction on Indian reservations. I feel comfortable analyzing state law and how it impacts Native Americans living on Tribal lands because I know the in’s and out’s of state jurisdiction on Tribal lands thanks to my professors.

Q: What is your advice for current students?
A: Get to know your professors and the people in your community. Indian law is a small field and the people around you have a wealth of knowledge. These are people that will go on to be your mentors, colleagues, adversaries in court, or just lifelong friends. Get to know them, and remember, when someone helps you make sure you help them down the road.

Q: Who are three Native American women law professionals and/or advocates who should be on our radar right now?
A: Sarah Crawford (’19), Blair Tarman (3L), and Rellani Ogumuro (’19)

Q: Favorite law school memory.
A: Doing moot court in 2019 with Sarah Crawford, Ana Laurel, and Meredith Duarte. We put in a lot of work, Sarah and I did not advance, but we all became really close and the friendship I have with them is an important part of my life and something I’m grateful for every day.