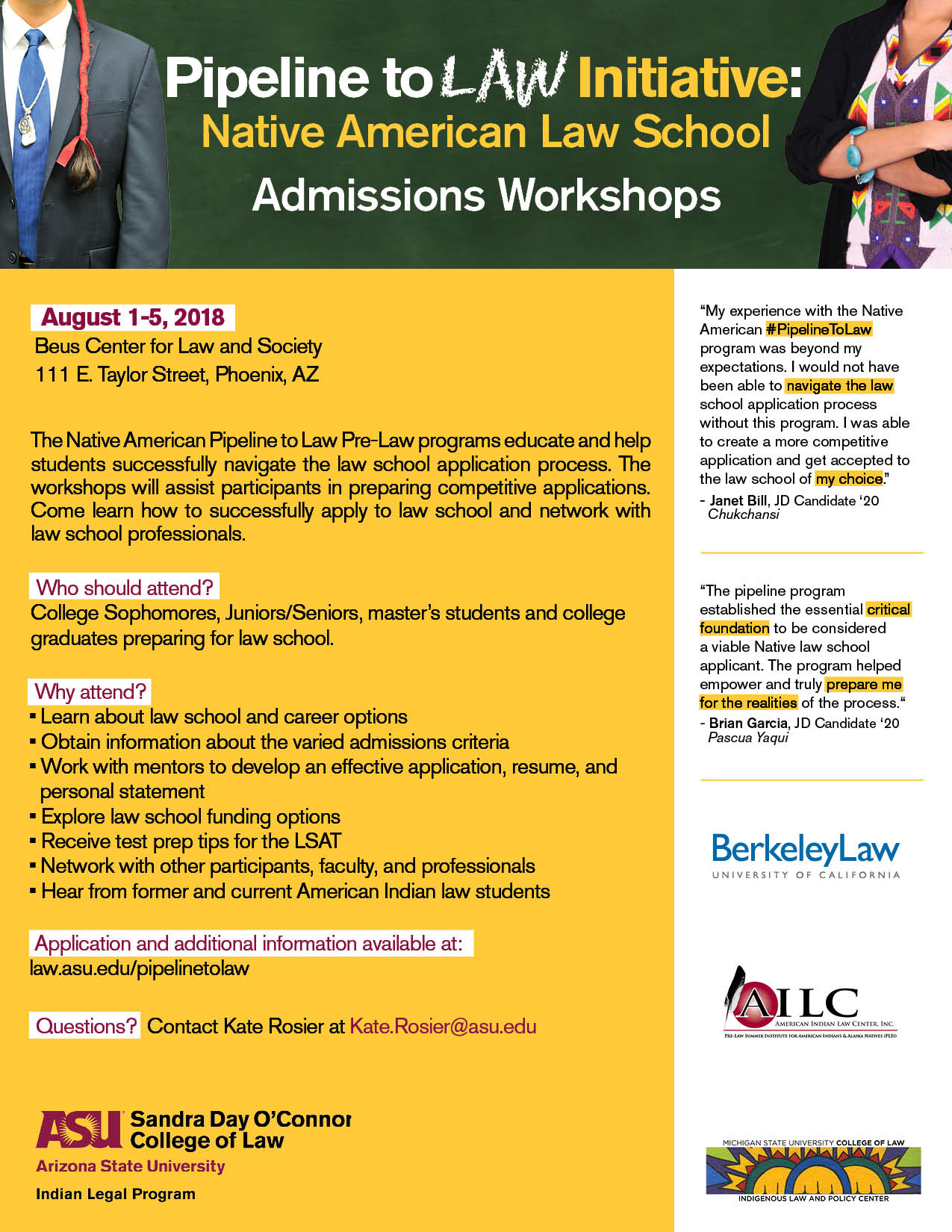 This summer the Native American Pipeline to Law team will host a 5-day session to help students better understand the law school admissions process at University of Washington School of Law in Seattle, Washington. Housing provided and a limited number of LSAT Prep courses will be available for participating students. Space is limited, register soon!

The American Civil Liberties Union of Montana (ACLU-MT) is looking for a motivated person with relationship building skills to join our team as an Indigenous Justice Organizer. The ACLU-MT works on a variety of issues that impact Indigenous people – from voting rights, to education, to reforming unjust criminal laws. Over the past two years, we have worked to build Indigenous Justice into every aspect of our organization through building relationships with Indigenous leaders and community members and prioritizing issues identified by Indigenous communities. We are now ready to expand the program by hiring an additional staff member committed to Indigenous Justice.

This position is guaranteed for two years (summer 2018 through summer 2020), and we will seek additional funding to continue the position past 2020. The Indigenous Justice Organizer will work in the Advocacy and Policy Department with the Director of Advocacy and Policy (Missoula), the Indigenous Justice Program Manager (Missoula/Hi-Line), and the Policy Assistant (Helena). The position will also work in collaboration with other staff and ACLU-MT volunteers. This position will ideally be based in Billings or on the Crow or Northern Cheyenne reservations, though we are open to a discussion depending on the best candidate. Frequent travel statewide will be required.

Phoenix, Ariz. – May 17, 2018 – The Indian Legal Program at the Sandra Day O’Connor College of Law at Arizona State University is pleased to announce its new partnership with the National Congress of American Indians (NCAI) to produce a monthly podcast. ASU Law alum and Senior Counsel at NCAI Derrick Beetso, will work with the Indian Legal Program (ILP) team to produce a free and educational podcast on federal Indian law and policy. Titled “The Talking Stick: A Native American Law & Policy Podcast presented by NCAI,” the first podcast is scheduled to launch next month.

Applications are being accepted for two vacancies on the Superior Court in Maricopa County created by the retirement of Judges Aimee L. Anderson and Peter C. Reinstein.

The Maricopa County Commission on Trial Court Appointments will review applications, interview selected applicants, and recommend at least three nominees for each vacancy to Governor Doug Ducey, who will appoint the new judges.

A signed original application with all attachments, and a searchable .pdf version of the application and attachments must be submitted to the Administrative Office of the Courts, Human Resources Department, 1501 W. Washington, Suite 221, Phoenix, AZ, 85007, by 3:00 p.m. on May 31, 2018.

Applicants for the recent vacancy in Maricopa County DO NOT need to reapply to be considered for the new vacancies.

We are currently seeking volunteers to role-play witnesses and jurors for a mock trial that takes place during Tribal Court Trial Skills College. This event is volunteer-driven, so your participation is highly valued.

If you are interested in volunteering or have any questions about the requirements, please contact Helen Burtis at hburtis@asu.edu or 480-727-0420.

Want to learn more about the Tribal Court Trial Skills College? Check out the website at: law.asu.edu/tribalcourt2018