Statement by the President on Native American Heritage Day

“Tomorrow, Americans everywhere will observe our National Day of Thanksgiving. It will be a time of celebration and reflection as we gather with family and friends to count our blessings and remember those less fortunate. But it will also be a time to remember how this holiday began— as a harvest celebration between European settlers and the American Indians who had been living and thriving on the continent for thousands of years.”

“That is why on Friday, I encourage every American to join me in observing Native American Heritage Day. My Administration is committed to strengthening the nation to nation relationship with tribal governments. But it is also important for all of us to understand the rich culture, tradition and history of Native Americans and their status today- and to appreciate the contributions that First Americans have made, and will continue to make to our Nation.”

On November 4th, Professor Patty Ferguson-Bohnee testified before the U.S. Senate Committee on Indian Affairs, at an oversight hearing on “Fixing the Federal Acknowledgment Process.” She did an outstanding job and everyone here at the Indian Legal Program and Indian Legal Clinic is extremely proud to have her as a colleague. Watch her testimony at http://www.law.asu.edu/?id=2102

Kerry Patterson recently joined the Phoenix office of Lewis and Roca as Of Counsel. See link below.

Kerry was named 2009 Arizona Business Journal 40 Under 40 Honoree. Ms. Patterson was also a Native American 40 Under 40 award winner, as presented by the National Center for American Indian Enterprise Development in 2009. The group recognizes outstanding young Native Americans throughout the United STates who have shown excellence in community and professional endeavors. 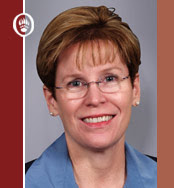 Rebecca Tsosie has a book review in the recently published American Indian Culture and Research Journal, volume 33, number 3, page 137. It is a book review of Rebuilding Native Nations: Strategies for Governance and Development. 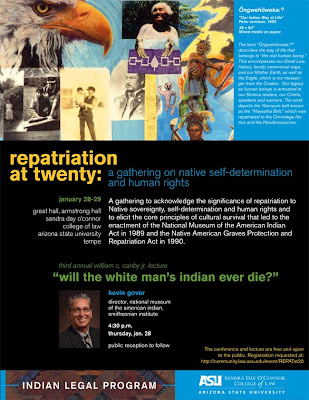 Free and Open to the Public. Registration encouraged for planning purposes.
http://community.law.asu.edu/event/Repatat20

On behalf of the ILP, I wanted to share exciting news and a link. Patty Ferguson Bohnee and four Indian Legal Clinic students are in Washington DC today. Patty was asked to present testimony at an oversight hearing on “Fixing the Federal Acknowledgment Process” for the Senate Committee on Indian Affairs. Patty was invited to speak last week and the students helped her prepare her testimony. If you would like to see the testimony you can watch now at the following link. http://indian.senate.gov/public/index.cfm?FuseAction=Hearings.LiveStream It is my understanding that Patty will be the last speaker today. On a side note, the students will also have an opportunity to watch a Supreme Court oral argument while in DC. What a great opportunity for our students!

PHOENIX — Kerry Patterson has juggled a family, school and work in an effort to give back to Indian country.Patterson, 38, has been practicing law for eight years and is the transitional attorney for Fennemore Craig PC in Phoenix, Ariz. She handles real estate, corporate law, leasing and anything that pertains to economic development. She was recently named a winner of the National Center for American Indian Enterprise Development’s 40 Under 40 awards.
Patterson grew up in western New York on the Cattaraugus reservation and is an enrolled member of the Seneca Nation; the nation is one of the six tribes of the Iroquois Confederacy and has more than 7,200 enrolled members, according to the Seneca Nation Web site.Patterson attended SUNY Fredonia while working for the Seneca Nation as the human resource manager in the enterprise division and being a full-time mother. Patterson earned a bachelor’s degree in political science and was the first from her family to graduate college.
“My sister has always been a self-motivated individual. Despite many adversities she encountered throughout her life, she has always managed to remain focused on her goals,” said Gerri Printup, Patterson’s sister. “While attending college she was able to balance family and work, while being on the Dean’s List.” Her sister inspired her to go to college, and Printup received a bachelor’s degree in environmental science and works for the Seneca Nation in the planning department. Patterson also has a brother named Aaron.
In I998, Patterson moved her family to Phoenix, Ariz. where she continued her education at Sandra Day O’Connor College of Law at Arizona State University. “While I was getting my bachelor’s degree I wanted to help all tribes and the best way I thought was by being educated in law.”
Patterson has three children named Jordy, 19, Jake, 12 and Alexa, 4. She said it was hard juggling a family and law school. But her husband, Al, and her family has always been supportive. “My grandma and mom both came out (from New York) to help me with the kids when I needed them,” Patterson said. “It was challenging moving to a new place, but it made us stronger.” Patterson’s father is an iron worker and her mother was the clerk for the Seneca Nation which is one of the three highest positions. The other two positions are president and treasurer. “She has always been a good role model for me.”
Patterson’s latest project is working with the Navajo Code Talker Association. The association received a 200-acre lot donation from Chevron Mining Company in New Mexico and they want to build a museum on the lot. The site is located along Highway 264 between Gallup, N.M. and Window Rock, Ariz. “If we don’t get stories in a museum they (code talkers) will pass and nothing will be on record,” Patterson said. “There needs to be a place for all their memorabilia and stories.”
Patterson is excited about the opportunity to work with the code talkers; she enjoys working with Native elders, especially listening and learning from their stories. She said this is the most meaningful project she is working on right now since there is no place where you can go to learn about code talkers.“ I consider it an honor and privilege to work with the code talkers on this project. They are the true American heroes and their story is one that all Native people can take pride in. It is exciting to be involved in a project that will serve as a lasting tribute to the unique contribution of the Navajo code talkers.” Patterson hopes to continue to use her legal education and experience to work on other projects that benefit Indian country.
In her spare time, Patterson enjoys running and competing in mini-triathlons. She likes spending time with her children and watching them play sports. Jordy plays lacrosse, Jake plays golf and Alexa is a swimmer.