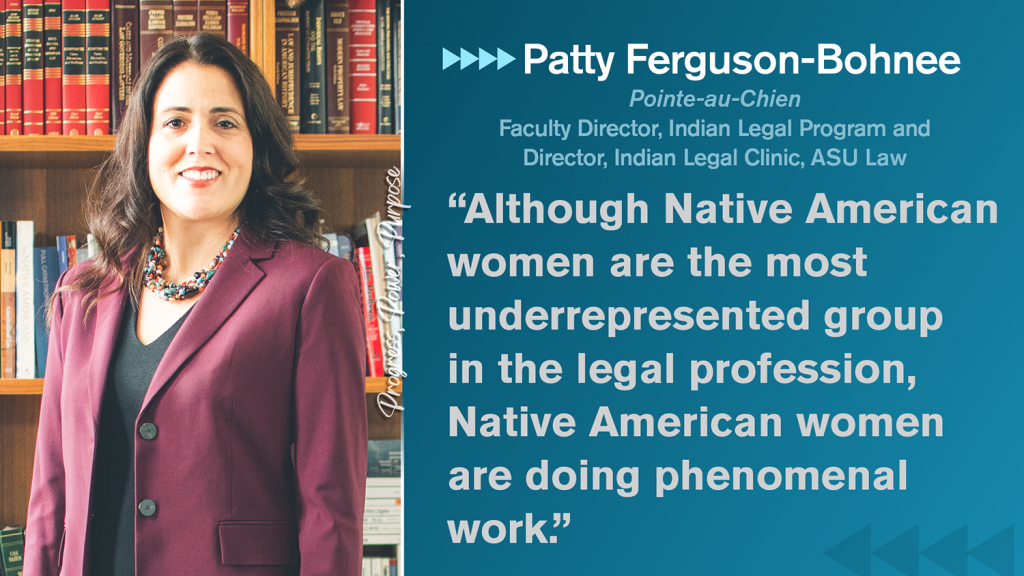 In celebrating “Women’s History Month,” we turned to some of the women of the ILP to shed light on Native women legal professionals and advocates in this Progress, Power, Purpose series. Indian Legal Program Faculty Director, Indian Legal Clinic Director and Professor of Law at ASU Law Patty Ferguson-Bohnee is of the Pointe-au-Chien tribe from Louisiana. In addition to teaching, this formidable force is most known for her continued work on the Arizona Native Vote Election Protection Project, which did Indian Country a great service in the 2020 presidential election, moving closer to a democracy that honors and values Native voters. While the pandemic was not an ideal circumstance, Native Vote took to digital media by storm with interviews, trainings, presentations, collaborations and most notably, the newly created Polling Locator Tool. Read more in Arizona Native Vote Changemakers.

When she’s not leading the charge in Native Vote, Patty is preparing students in her Indian Legal Clinic and promoting diversity and inclusion.

Q: What does your current position entail?
A: I serve as the Director of the Indian Legal Clinic and Faculty Director of the Indian Legal Program at the Sandra Day O’Connor College of Law at ASU.  I am so blessed to be able to work with leading scholars and practitioners in Indian law and Tribal law and motivated students who really care about serving Indian Country.  In the Indian Legal Clinic, the students practice under my bar license.  We work on matters in tribal, state, federal, and international forums.  The cases range from probate, family, criminal and civil litigation, voting rights, code drafting, environment, climate, and status clarification of tribes. My goal is that the students learn useful practical skills and develop a passion for service, while also serving unmet needs for Indian Country.

Q: What is your proudest career moment?
A: Assisting Four Louisiana Tribes in securing state recognition.

Q: Is there anything you’ve learned after graduating law school that you wished you learned in class?
A: Many law students do not learn that there are three sovereigns—the state, the feds, and tribes.  While this might not be harmful in some states, in the southwest, it could lead to malpractice.  It also means that as Native lawyers and practitioners of tribal law and Federal Indian law, we are always teaching—the judges, opposing counsel, co-workers, clients, and others.  At ASU, it is great to have Indian law professors teach first year courses so that they can provide this lens in which to analyze the law.  It makes us all better attorneys and advocates.  Everyone should learn Indian law basics because it transcends all areas of law.

Q: What is the most valuable lesson you learned in the classroom that has helped you in your career?
A: I took a few practical courses that served me well. One was environmental litigation, which included drafting briefs and an appellate argument.  The other was mediation clinic, which taught me to listen and provided me tools to help resolve disagreements.

Q: Who are three Native American women law professionals and/or advocates who should be on our radar right now?