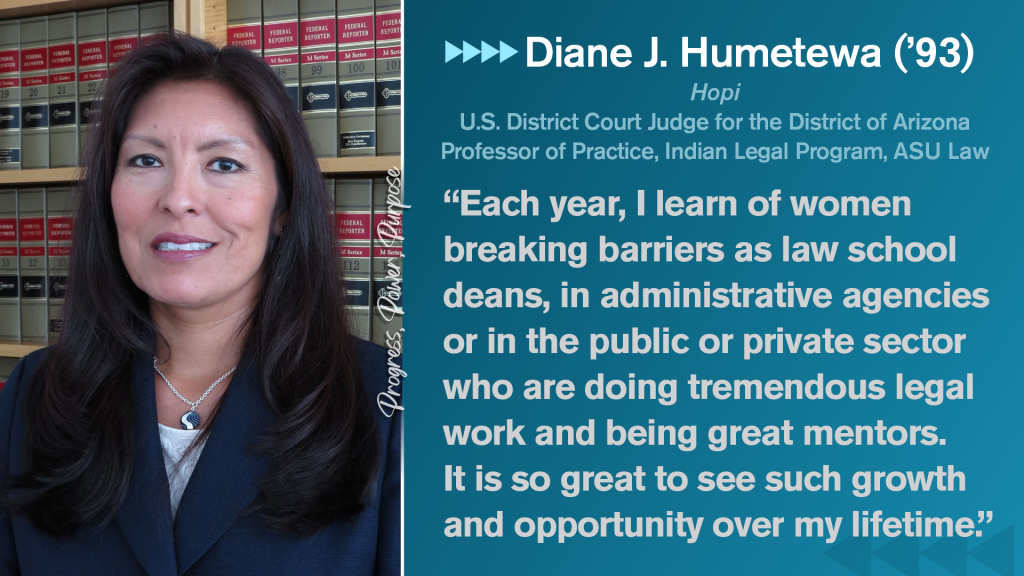 In celebrating “Women’s History Month,” we turned to some of the women of the ILP to shed light on Native women legal professionals and advocates in this Progress, Power, Purpose series. The ILP Family, more specifically, the Native women student population has grown year-to-year and that is in no small part due to Native women representation like ILP alum, Professor of Practice at ASU Law and the U.S. District Court Judge for the District of Arizona, Honorable Diane Humetewa who is the first Native woman to serve on a federal district court.

Q: What does your current position entail?
A: I am a district court judge presiding over civil and criminal cases filed in federal district court.

Q: Were you always interested in this kind of work?
A: No. It was only after working in the federal court system as a victim’s advocate, and encouragement from attorneys in the U.S. Attorney’s office that I eventually applied to law school.

Q: What advice do you have for Native American women who want to work in this area?
A: If you want to be a litigator or eventually, a judge, find a way into court (city, state, federal, or tribal court).  That is, by either practicing in a firm or office that enables you to file pleadings, or to appear in court, or to provide pro bono services in court.  That is really the only way to learn the rules, processes and what the expectations of court practitioners are.

Q: What is your proudest career moment?
A: Watching Senator John McCain introduce my nomination to the Arizona district court on the floor of the United States Senate.  Then watching the vote.

Q: Is there anything you’ve learned after graduating law school that you wished you learned in class?
A: That the study of law and actual practice of law are two different things.

Q: What is the most valuable lesson you learned in the classroom that has helped you in your career?
A: My opinions and experiences were just as valuable as everyone else’s.  So, I should not hesitate to share them.

Q: Who are three Native American women law professionals and/or advocates who should be on our radar right now?
A: There are more than just three. Each year, I learn of women breaking barriers as law school deans, in administrative agencies or in the public or private sector who are doing tremendous legal work and being great mentors.  It is so great to see such growth and opportunity over my lifetime.

Q: Your favorite law school memory.
A: Finding new and lasting friendships. Attending the fajita cook-off or going country dancing after a long school week. To this day, I count some of my 1L classmates as among my dearest friends.

Q: You are a Native American woman making history and have been the “first” in prominent areas throughout your career—first Native American woman federal judge, first Native American woman to serve as United States Attorney—Did you ever feel like the lone Native American voice in the room? How did you overcome those adversities? For that girl/woman who is finding her rhythm and trying to carve out a space to thrive, what advice would you give her?
A: I did feel alone because I was alone. That is, I was usually the only “Native” in the office, the courtroom, or seated at the conference table.  For me, the only way to overcome the insecurities and the demands of such situations was to focus on the work at hand and to think about who may benefit from it.

The advice I would share is to be patient with yourself and with others. Law school teaches you how to “think” like a lawyer, but like everything else in life, you have to actually learn the law and practice it before you become proficient.