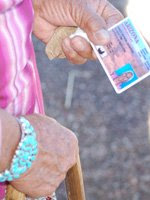 As people around the globe reflect on the historic presidential election in America Nov. 4, one elderly Navajo grandmother in northern Arizona celebrated her re-established right to cast her ballot, an act made possible with the help of Patty Ferguson Bohnee, director of the Indian Legal Clinic. Agnes Laughter, 77, who speaks only Navajo, had voted all her adult life using her thumbprint as her identification. But she was turned away from the polls in 2006, when new voter identification laws went into effect in Arizona. “I started voting early,” Laughter explained through an interpreter. “When I voted, I always used my thumbprint. That represents me.

“When I was told it was not valid, I went through much sorrow, much heartbreak,” Laughter said, her eyes filling with tears. “Many times I was not able to sleep because I was so concerned about people discrediting who I am.” Laughter was born in a hogan and has no birth certificate. She doesn’t drive and has no driver’s license. She doesn’t own a car, or have utility bills or any of the other items that most people use to prove their citizenship.

Her case became part of a lawsuit that was settled in May 2008 when the Department of Justice pre-cleared an expanded list of the types of identification that Native Americans can use to satisfy the new identification requirements at the polls. This was especially important for Navajo Nation members who do not have tribal identification cards. Native Americans were recognized as citizens under the Indian Citizenship Act of 1924 but faced significant legal barriers to voting.

By coordinating Election Protection efforts and by taking other proactive measures, the Indian Legal Clinic hopes to ensure that Native Americans have an equal opportunity to participate in the electoral process. “Ms. Laughter is a strong, inspiring woman,” Ferguson-Bohnee said. “She faced ridicule and embarrassment after she was denied a ballot in 2006, but she was determined to continue the fight on behalf of Navajo people.”

After the lawsuit, Laughter was determined to receive a State Identification card, but failed in several visits to tribal and state offices. So just days before the 2008 election, Laughter left her home in the windswept mesas of the Navajo Nation, to travel through the maze of government regulation that would allow her to once again express her electoral opinion. Her work-worn hands rubbed the crook of her cane as she patiently waited … at the Tuba City office of the Arizona Department of Motor Vehicles which did not have a machine to immediately issue the ID, at the Navajo Area Office where she had to obtain an Affidavit of Birth, on the drive to the DMV office in Flagstaff, in the plastic chairs beneath the lighted sign that would eventually display her number … waiting for the elusive identification card that would allow her to vote.

When the moment finally arrived, she stood proudly in front of a purple wall, drawing her 5-foot frame up straight, adorned in her family’s turquoise jewelry, and smiled as the industrial camera recorded her image. And when she held the shiny, laminated Arizona identification card, staring at herself staring back, she cried. “All of my heartache has changed as of this day,” she said. “I have an identity now. My thumbprint will stand. I feel fulfilled.”

The Indian Legal Clinic also organized observers to monitor polling places on and near reservations around the state where, in the past, there had been complaints about intimidation or people having trouble voting, and organized a phone line where Native American voters across the State could call in with any questions regarding voting problems on Election Day.

Derek Beetso, a Navajo second-year law student, sat in a folding lawn chair outside the polling place in Sacaton, near the Gila River Indian Community. “We’re here to give information in case people are told they’re not allowed to vote,” Beetso said. “I believe people have a right to vote and that shouldn’t be obstructed by misinformation or intimidation.”

Laughter, reflecting on the efforts of the clinic, expressed her thanks. “My grandchildren, those of you studying to become attorneys, I am filled with so much happiness,” she said. “Today, you’ve made me feel as if I am standing up high on the mountaintop, to feel that I am somebody, that I am able to vote, that I can have an identification. I thank you from the bottom of my heart. “I want you to know, all of you studying to be attorneys, that it is for the defenseless individuals like myself, the elderly, that you are studying to make a difference in their lives. This is your destiny. A difference has been made in my life.”