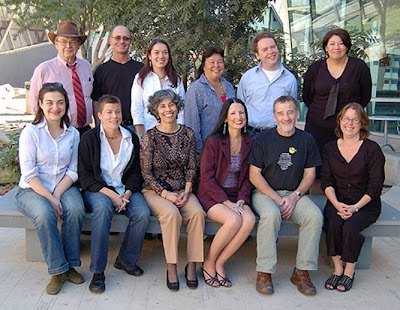 Scholars use discussion to explore governance of indigenous genomics

A dozen scholars from across the globe met recently at the Sandra Day O’Connor College of Law to discuss the promise and perils of current efforts to transform indigenous people’s governance of genomic research.

“This is a select group capable of drawing on their past experiences to envision the future,” said Rebecca Tsosie, Executive Director of the Indian Legal Program at the College of Law, who is principal investigator of the National Science Foundation grant funding the workshop, “Genomics, Governance, and Indigenous Peoples.”
“Many people are writing about this issue, but you are actually doing things, putting things into practice,” Tsosie told the group as the two-day workshop began on Thursday, Nov. 6.
Tsosie and her two fellow organizers — Kim TallBear, assistant professor of Science, Technology, and Environmental Policy at the University of California, Berkeley, and Jenny Reardon, Assistant Professor of Sociology and Faculty Affiliate in the Center for Biomolecular Science and Engineering at the University of California, Santa Cruz — said they invited participants who were not afraid to seriously engage the issues.
The “no-powerpoint” format of the workshop had participants share written responses to several questions before convening, and then participate in several recorded dialogues that will be used to produce a written document.
TallBear said the format was inspired by work she did on a book, This Stretch of the River, in response to the celebration of the Lewis and Clark Expedition. In that book, several Lakota and Dakota writers taped their discussions of the subject.
“The conversations produced knowledge and experience that was not present in our written work,” TallBear said.
And the work to edit and compile the project meant the learning continued beyond the conversations, she added.
Discussion topics at the genomics workshop included: cultural harm and transforming the legal system; charitable trusts, biobanks and partnership governance of genetic research; and tribal-genetic research agreements, indigenous research, and governance implications.
Participants included experts in human genetics and the social, legal, and ethical aspects of genomics in different national and cultural contexts. They have experience working within existing regimes of governance and see a need for policy innovation and change in relation to genomic research. Some participants are already engaged in experimental efforts to create change. The workshop, first conceived as being focused on the United States and “tribal” governance of genomics, was broadened to include scholar practitioners working in other parts of the world in recognition that strategies for governing genomic research cannot be contained by national borders.
In addition to Tsosie, TallBear and Reardon, participants included:
Laura Arbour, Associate Professor in the Department of Medical Genetics and the Island Medical Program at the University of British Columbia based in Victoria BC;
Philip S. (Sam) Deloria, Director of the American Indian Graduate Center and former director of the American Indian Law Center, Inc., for more than 35 years;
Nanibaa’ Garrison, a Ph.D. Candidate in the Department of Genetics at Stanford University working on the genetics of human pigmentary variation;
Nadja Kanellopoulou, an academic lawyer who specializes in medical law, intellectual property and bioethics based at the Arts & Humanities Research Council Research Centre for Intellectual Property and Technology Law at the University of Edingurgh in Scotland;
Paul Oldham, a social anthropologist and researcher at CESAGen a research center based at Lancaster University in England;
Pilar N. Ossario, Associate Professor of Law and Bioethics at the University of Wisconsin at Madison who also serves on the Director’s Advisory Council for the National Human Genome Research Institute and as an advisor for the 1000 Genomes Project, the Human Microbiome Project, and for NHGRI-related tissue banking activities at Coriell;
Terry Powell, a member of the Alaska Area Institutional Review Board, whose interests include research ethics, health care research, and bioethics;
Brett Lee Shelton, a partner in the law firm Shelton and Ragona, LLC, of Louisville, Colo., and who sits on the Oglala Sioux Tribal Research Review Board in Pine Ridge, S.D.;
Brian Wynne, Associate Director of the Centre for Economic and Social Aspects of Genomics, Professor of Science Studies and Research Director of the Centre for the Study of Environmental Change at Lancaster University in England.