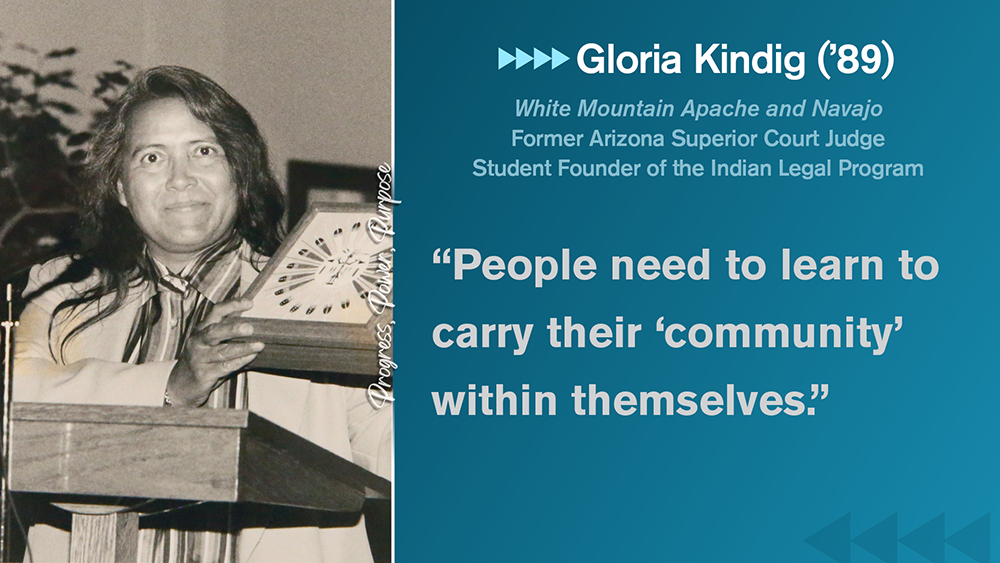 In celebrating “Women’s History Month,” we turned to some of the women of the ILP to shed light on Native women legal professionals and advocates in this Progress, Power, Purpose series. ILP Family started when a small handful of Native law students at ASU wanted to change the narrative at the time—for a university in a state with a large Native American population, there were only a few Native American students attending ASU Law. The focus on expanding opportunities was vital for these few Native law students. They became the representation and changemakers who drafted the proposal, formed a committee and gained the support of law professors and then Dean Paul Bender to establish the ILP. Gloria Kindig with her classmate LynDee Wells (’89) are the determined women whose thoughtful vision led to the creation of the Indian Legal Program and its 32 year legacy. “The two of us combined were a force that would not be denied,” Gloria candidly wrote as she recounted the formation of ILP for our 30th anniversary in 2018.

Q: What does your current position entail?:
A: Well, since I’m totally retired these days, my time is my own.  I gave up all my visiting Judicial positions in 2019.  Just in time to be part of the social distancing, stay at home crowd of 2020.

On a serious side, giving up my judicial career and leaving the legal field behind has been interesting.  In some ways it felt like I was wasting my legal education.  But, on the other hand, I firmly believe that at some point everyone needs to step to the side.  If we don’t, then where will the up and coming women find opportunities?  They deserve the opportunity to shine.

Q: Were you always interested in this kind of work?
A: The short answer is no.  Prior to going to law school I had a career as a Mining Engineer up in Wyoming, with a bit of farming on the side.  Should I mention that I was one of the first female Mining Engineers and to my knowledge, the first Native American Mining Engineer back then?  I must admit that it was interesting, if hard, to be standing alone in a career field that needed a bit of diversity.   But times were changing and the mining industry was suffering a major downturn, a good time for a change.

Should it be Law school or Veterinary school?  A hard choice, but Law school it was.  A Native student at ASU picked up the phone and convinced me that ASU Law School was the place for me.  Given my prior career I thought that a practice in water law, mineral law, or mining law would be a good fit.  But life has a way of changing things.  A summer position at a firm that specialized in mining and water law convinced me that I needed a new direction.

While working as an Associate General Counsel for the Hopi Tribe I was offered the position of Chief Judge for the Hopi Tribal Court, the beginning of my Judicial Career.  During this time there was some discussion in the County about changing the way Judges were elected, changing from at-large elections to district elections.  Finding out that no Native American woman had ever tried to be elected to the Navajo County Superior Court Bench inspired me to give it a try.  I soon found myself on the Superior Court Bench.

After eight years on the Bench I lost my reelection bid and had to find a new career.  I became a visiting Judge in a number of Tribal Courts as well as a Judge ProTem in Apache County Superior Court, until I fully retired in 2019.

Q: What advice do you have for Native American women who want to work in this area?
A: Whether a person becomes a Tribal Judge, a State Court Judge, or a Federal Court Judge they must always remember to put all their personal bias aside when they put their Judicial robes on.  They should also remember to give each individual and case their full attention.  Yes, it might be the eighth, tenth, or more divorce case you, as a Judge, are hearing that day, but it is the only divorce case the individuals are involved in at the moment.  The individuals are important, the case is important and they deserve your full attention.

I would also suggest that they learn the art of truly listening.  Yes, listening is an art and takes practice.

Q: What is your proudest career moment?
A: I must say that my proudest moment happened when I was still a student at ASU.  It was the day the ASU Faculty approved the Indian Legal Program.  When I joined the ASU Law school student body in 1986 there was not an Indian Legal Program.  Just a class or two titled “Indian Law,” this in a state with such a large Native American Land base and population.  A fellow Native American student and I found this unacceptable.  Working with the Dean and some faculty members the Indian Legal Program was drafted, accepted and implemented in the course of two years.

My second proudest moment in my legal career came when I was able to defy all odds and win an at-large election to the Navajo County Superior Court bench.

Q: What is the most valuable lesson you learned in the classroom that has helped you in your career?
A: Remember that I was in law school before there was an ILP, before there was much coverage of Indian Law as it related and relates to all the major areas of law.  It was also a time when there were very few Native American law students at ASU.

Not always being a welcomed student taught me to pay attention at all times, to be prepared at all times, to control my feelings at all times. And rather than react with anger, turn negative words and experiences into opportunities to teach others or at least show them the other side of the coin. Good training for a Judge, be attentive, listen, don’t display bias, don’t react to the outbursts of others.

Q: Who are three Native American women law professionals and/or advocates who should be on our radar right now?
A: I don’t really know of any up and comers, my failing not theirs. I have been out of the ‘loop’ for a long time now. But I’m sure that all the many ILP women are people to watch. They will surely do great things in their careers. Be it a legal career or a career in which their ILP experience and life experience can make a difference and improve the lives of others.

The key was not viewing it as an adversity. Viewing something as adversities results in the desire to overcome or fight the problem. I always found that I might have to voice my opinion time and time again, but if I refused to react in haste and anger, sooner or later, I could usually wear the others down. One also needs to be willing to draw that line in the sand and if others cross it, one needs to not only be willing to get up and walk out or away, but actually get up and walk away.  Worked for me, but also resulted in a few career changes, which worked out for the better in the long run.

My advice may seem strange and frankly, I never realized that I was doing it until a friend, coworker pointed it out.  But people need to learn to carry their “community” within themselves. If you don’t, you face the risk of doing things to please others, to impress others, to let others disrupt the rhythm of your life and force you into the box they think you belong in.