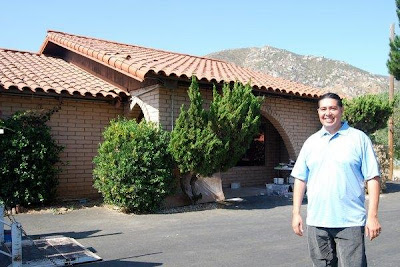 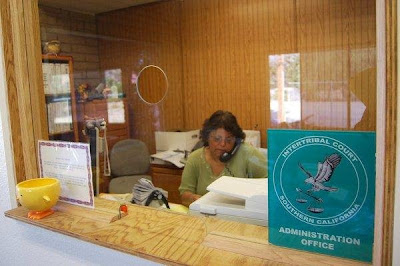 New home more centrally located, officials say
By EDWARD SIFUENTES – Staff Writer Wednesday, July 30, 2008 11:05 PM PDT
The Intertribal Court of Southern California has a new home at the Rincon Indian Reservation. Lisa Powless, the court’s clerk, answers phones at the new location. (Photo by Edward Sifuentes – Staff Photographer) The Intertribal Court of Southern California has a new home at the Rincon Indian Reservation. Temet Aguilar, the court’s administrator, said the facility is scheduled for a grand opening ceremony Friday. (Photo by Edward Sifuentes – Staff Photographer)
RINCON INDIAN RESERVATION —- The fledgling Intertribal Court of Southern California has a new home at the Rincon Indian Reservation.The 3-year-old court deals with legal issues that arise on local American Indian reservations, such as civil disputes and land use, housing and family matters. It serves as an appeals court, mediator and arbitrator for 10 San Diego County tribes.Until earlier this month, the court was housed in an office building in Escondido. The Rincon tribe offered to remodel a building at its reservation on Golsh Road. The building was formerly occupied by the Indian Health Council, a clinic serving local tribal communities.Rincon will lease the building to the court for $1 a year, said Temet Aguilar, the court’s administrator. On Wednesday, construction workers were at work remodeling the 4,000-square-foot building, half of which will be used by the court. The space includes a reception area, administrative offices, a library, a conference room and a courtroom. The building is more than just a new home for the fledgling court, Aguilar said. “What this represents is the tribes entering into the modern era of their development by exercising their sovereignty,” Aguilar said. In 2006, retired Superior Court Commissioner Anthony Brandenburg was sworn in as the intertribal court’s judge. Brandenburg said the intertribal court fills a judicial gap that was created by the federal government in the 1950s. In California and several other states, law enforcement agencies, such as the sheriff’s department, have jurisdiction over criminal matters under a federal law called Public Law 280. However, sheriff’s deputies cannot enforce laws enacted by tribal governments, such as land use, hunting and illegal dumping ordinances. And outside courts don’t have authority to settle disputes among tribal members, such as trespassing, evictions and other minor infractions. Federal courts handle felony cases on the reservations. On local reservations, tribal councils, usually made up of five elected officials, serve as “judges” over disputes that occur in their reservations. They also are sometimes called upon to settle patron disputes in their casinos.Since most local tribes are small, family conflicts can often occur when disputes erupt in tribal communities. For tribes that participate in the system, the intertribal court serves as an independent judiciary, where people can appeal tribal council decisions, Brandenburg said. The court “takes the personal and political aspect out of it,” Brandenburg said. The member tribes are: Los Coyotes Band of Mission Indians, La Jolla Band of Luiseno Indians, Manzanita Band of Kumeyaay Nation, Mesa Grande Band of Mission Indians, Pala Band of Cupeno Indians, Pauma Yuima Band of Mission Indians, Rincon Band of Luiseno Indians, San Pasqual Band of Mission Indians, Santa Ysabel Band of Diegueno Indians and Jamul Indian Village. The intertribal court is largely funded by its member tribes and assistance from the Southern California Tribal Chairmen’s Association, a nonprofit organization that administers various welfare, educational and cultural programs for local tribes. Last year, the intertribal court handled about 100 cases. Most of the cases involved trespass disputes and family matters, such as child custody and child support disputes. It served as a mediator or arbiter in about 25 other cases, Aguilar said. The new location, which is more centrally located for most local tribes, may drive up demand for the court. It is also conveniently located near the Indian Health Council, which serves many of the same tribes as the court, said Court Clerk Lisa Powless. “I feel more involved in the community,” Powless said referring to the new location. “I like it.”
Contact staff writer Edward Sifuentes at (760) 740-3511 or esifuentes@nctimes.com.