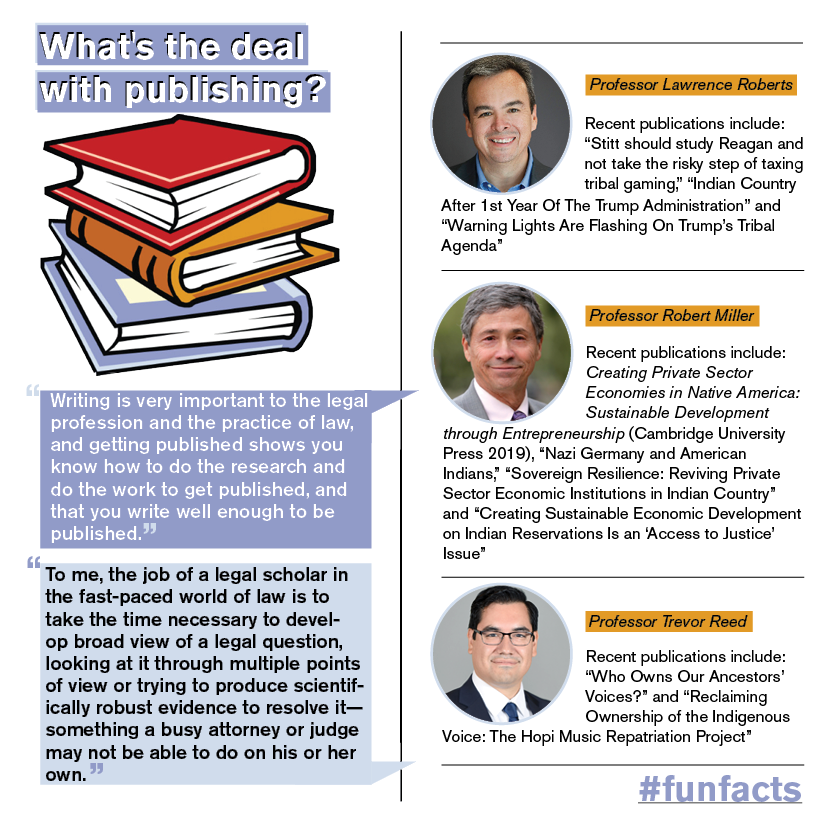 Getting a piece published can seem like a huge task, especially when you’re a student. Two of our excellent faculty members share their experience with publishing works and offer advice and opinions for those considering writing.

Q: What was your first book?

Q: What are your publications about?

Professor Trevor Reed: I write a lot about the relationship between creativity, culture, and sovereignty.  Some of my recent articles and book chapters look at how Indigenous peoples can use law to protect culture or promote creativity and innovation.  Others look at how creativity and culture shape tribal legal systems.

Q: What inspired you to write them/participate in their publication?

Professor Robert Miller: I never thought I would ever write a book.  But in 2003, my Tribe appointed me to be its representative to the Lewis and Clark Bicentennial Commission. I was an untenured law professor then and knew that I needed to write something legal about Lewis and Clark. I immediately thought of Johnson v. McIntosh, (1823), the U.S. Supreme Court case that adopted the international law Doctrine of Discovery, what I also call the international law of colonialism.  So I researched what President Thomas Jefferson knew about this international law and how the United States adopted it in colonial and statehood times, and then in the U.S. Constitution and through the Executive Branch and the Congress.  I then examined whether Jefferson applied the Doctrine to the American West, and the Oregon Country in particular, through the Lewis & Clark expedition.  I produced a 100+ page article that was published in the Idaho Law Review in 2005.  I showed the article to the professor in the office next to mine at Lewis and Clark Law School and he took one look at it and told me I had already written a book.  He immediately gave me the name and number of his editor and I made two phone calls and ended up with the editor from Praeger Publishers that ultimately published my first book in 2006.

Professor Trevor Reed: Most of my writing comes from the work I do in partnership with Tribes.  Often a Tribe or tribal member will ask me a tough legal question, and as I dig in I find that that question is linked to situations that exist across Indian Country.  The work I have done with Tribes around intellectual property repatriation has produced a lot of new writing for me, including these two articles.

Q: What do you think is the importance of publishing works?

Professor Robert Miller: Getting published is a very valuable addition to your resume and helps law students get hired as attorneys.  Writing is very important to the legal profession and the practice of law, and getting published shows you know how to do the research and do the work to get published, and that you write well enough to be published.  Being published also gets your ideas and your research into the public arena.  Law review articles are very important but I think that books can reach a wider audience and can have a much larger impact.  For example, I have given dozens of speeches about my book and the Doctrine of Discovery across the country, and even in foreign countries.

Professor Trevor Reed: I’ve heard from many lawyers that the only thing useful about a law review article is its case citations.  It may be true that a well-research, on-point law review article provides a ready-made set of citable cases for drafting memos and briefs.  But I think legal scholarship can be much more.  To me, the job of a legal scholar in the fast-paced world of law is to take the time necessary to develop broad view of a legal question, looking at it through multiple points of view or trying to produce scientifically robust evidence to resolve it—something a busy attorney or judge may not be able to do on his or her own.  This is especially true as academic scholarship is moving toward a trans-disciplinary approach, where scholars can now draw from the best methods, theories, and concepts available rather than being limited to just one way of thinking about an issue.

Q: What are some of the challenges you faced in the publication process?

Professor Robert Miller: Initially, my editor and I proposed a two volume set on the Doctrine that would have been primarily about Lewis and Clark.  That proposal was turned down.  But that was probably a good thing because in reality I did not have enough information on just the Lewis & Clark expedition and the Doctrine of Discovery to fill two books.  A few months later my editor called and told me that the executive who had vetoed my proposal was no longer with the company so we made a new one book proposal on the Doctrine of Discovery in American history that included an analysis of Lewis & Clark, Thomas Jefferson, and American Manifest Destiny.  It was accepted and I then wrote the book during my first sabbatical in 2005-06 and I submitted the first draft of the book in March of 2006.  My book came out in print in September 2006.  It was then republished in paperback by the University of Nebraska Press in 2008.

Professor Trevor Reed: One of the biggest challenges for me is tailoring my work to the very different audiences I publish for.  I write at the intersection of music, anthropology, Indigenous studies, and law, and each has a different style and approach to what matters in a publication.  I also write in a variety of media, from essays to law review articles to podcasts to full length books, and I write for academics, community members, policy makers, etc.   Knowing how to write in each medium takes practice, and having peers, mentors or editors to give you honest feedback is a must.

Q: What advice do you have for students who want to publish and article or book?

Professor Robert Miller: You have to write at least two major papers in law school to graduate.  You might as well select topics that you think are publishable and work as hard on them as possible to get them published.  When I was a law student, I published four law review articles and that certainly helped advance my career and helped me get the jobs I wanted.

Professor Trevor Reed: Writing a paper for a class can be a great starting point for an article or book.  I’m pretty new on the publishing scene, but my advice would be (1) be sure your project is something you are passionate about.  (2) Think about why your work would be relevant for a particular journal or publisher, and how your work fits with that organization’s goals.  (3) Try to write your work so that it sheds new light on an existing conversation about an issue, or show how you are starting a new conversation about an issue others haven’t thought of.  And (4), keep an eye out for narratives or through-lines that will hold your work together—is there a compelling case study that helps people understand your research?  How about a step-by-step process, a historical timeline, or some other way readers can latch on to the arguments you are making?

Q: Anything else you’d like to add or any future works you want to work on?

Professor Robert Miller: I plan on writing one final book on my second main subject of scholarship – advocating that tribal governments and reservation communities create private sector economies.  I am also currently writing three law review articles on various Indian law issues that intrigue me.  I also plan on writing another article in the near future that is tentatively entitled “Digesting American Indians.”

Professor Trevor Reed: I currently have a handful of projects I’m working on, including an article taking a critical look at negotiations between Tribal leaders and museums that led to the creation of the Native American Graves Protection and Repatriation Act (NAGPRA) almost 30 years ago.  I’m also working on a book chapter that evaluates the possibility of incorporating a “right to forget” into American law to expand data privacy protections for Indigenous and other groups historically exploited by researchers and other data collectors.  Finally, I am working on a full-length book entitled, “Sonic Sovereignty” that explores the many ways music and sound function as a mode of authority within Indigenous territories.