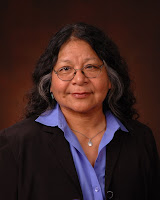 “Tribal Governance and Individual Rights: the Delicate Balance of Power and Alarm”

Diane Enos is the 23rd President of the Salt River Pima-Maricopa Indian Community and the second woman elected to this office. She is the daughter of Naomi and Johnson Enos, and the great granddaughter of Jose Anton, one of the leaders for the Pima communities at the time of the Indian Reorganization Act.

As a trailblazer for the community, President Enos became the first member of the Salt River Indian Community to become a lawyer. As a Senior Trial Attorney, Enos practiced in the Maricopa County Public Defender’s Office for 11 years.

Enos has spent her entire professional life in community service, is dedicated to promoting education for the Salt River Pima-Maricopa people and in creating new opportunities for traditional O’odham (Pima) and Piipaash (Maricopa) life to flourish within the Community.

She avidly supports small business and believes that tribal government has a responsibility to plan for development by creating synergies so all Community members can share in the financial gain. In the near future, she hopes to encourage more small business owners to become vendors, employers and “vision-creators” for the Salt River Pima-Maricopa Indian Community to enhance the social, economic and cultural foundation of the Community.

Prior to being elected President, Enos served on the Council for the Salt River Pima-Maricopa Indian Community for sixteen years serving four terms. She was first elected to Council while a second-year law student at Arizona State University. She became interested in law and politics while working as a news reporter, covering the proposed Pima Freeway for the “Scottsdale Progress” newspaper.

Currently, in her position as President, Enos also serves as the Chair of the Maricopa County Association of Governments Domestic Violence Committee, member of the Tribal Justice Advisory Group to the U.S. Department of Justice Tribal Justice Programs, is a member of the Executive Committee for the Intertribal Council of Arizona, and Secretary for the Executive Committee of the Arizona Indian Gaming Association.