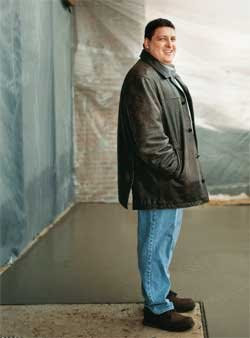 Lance Morgan, CEO of Ho-Chunk, Inc, is scheduled to teach an Economic Development in Indian Country Seminar at the College of Law in January. This one week winter intersession class is open to all law students and graduate students. (If you are not a law student, please check with your College to see how you can register.) I have listed the course information and an article about Lance Morgan below. Please share with anyone you think might be interested.

Description:This seminar will focus on a wide range of contemporary tribal economic development issues. Historical and relevant federal Indian case law will be used as background material, but the primary purpose of the seminar will be to describe the practical political, legal, economic, structural, and cultural issues faced by tribes when trying to develop their economies. Additional emphasis will be placed on how these tribal initiatives can conflict with federal case law, state jurisdiction, and federal policies towards tribal economic development. The seminar’s focus will be on helping identify and implement creative tribal-based solutions. Although the relevant federal Indian case law will be discussed when necessary, having taken a course in Federal Indian law will be helpful.

When Lance Morgan ’93 looks out his office window, he sees a collision between the past and the future: A herd of buffalo passes on a hilly expanse nearby, while just beyond it an entire town is beginning to take shape.

“We really are walking in a couple of different worlds–trying to figure out how to be a modern entity and still be Indian,” said Morgan, the founder and CEO of Ho-Chunk Inc., an economic development corporation that is reshaping the future of the Winnebago Tribe of northeastern Nebraska.

A decade ago, this 134,000-acre reservation nestled in the hills along the Missouri River was quickly becoming a ghost town. There was no town center–just scattered rows of government housing, a gas station and a grocery store. Winnebago families had been leaving the impoverished reservation for years in search of work, and the community was suffering.

Morgan was raised in Omaha, though he and his family spent summers and holidays on the reservation. Growing up poor, he dreamed of becoming financially independent. He joined the military to pay for college at the University of Nebraska-Lincoln and then attended Harvard Law School.

After HLS, Morgan went to work at a Minneapolis law firm that represented Indian tribes. When his own tribe’s casino venture was threatened by new competition, the tribal council approached him for help diversifying its revenue stream. “I basically couldn’t let it go,” said Morgan, who’d written his third-year law paper on economic development. “I left my job to come do this.”
Using revenue from the WinneVegas operation, the tribe’s lone casino, Morgan founded Ho-Chunk Inc., a startup that has invested in businesses on the reservation that provide the community with goods and services and, more important, jobs and job training.

Since its launch in 1994, Ho-Chunk (loosely meaning “the people”) has gone from $400,000 in annual revenue to a projected $115 million this year. It employs 499 people in 11 companies focused on everything from housing construction and banking to hotels, tobacco sales and the Internet. One of its Web sites, Indianz.com, is, according to Morgan, the most popular Native American destination online.

But perhaps most critical to the tribe’s future has been another HCI venture, the nonprofit Ho-Chunk Community Development Corp., which is building a town from scratch on a 28,000-acre stretch of the reservation bought from the federal government.

Ho-Chunk Village will include the reservation’s first-ever town center, with commercial and government buildings surrounded by single-family homes and townhouses that Morgan says will be sold to tribal members at affordable prices.

“Right now about 70 percent of housing on the reservation is government-owned,” said Morgan. Under this system, he explains, even those who are doing well can’t own their homes, and the lack of tax revenue makes it hard for the community to thrive.

HCI’s impact on the Winnebago Tribe can’t be overstated. Already, it has given more than $30 million back to the community in jobs, scholarships, expansion of the tribal college, and job training programs. It has also had a major role in building a new high school and a hospital.

Ho-Chunk Inc.’s success has been noticed by other tribes. Morgan has already consulted with 74 tribes seeking to replicate his model for economic development. He is also a consultant to the federal Bureau of Indian Affairs and lectures around the country on the state of reservations.
Morgan envisions an end to the archaic reservation system that is rooted in long-outdated assumptions about the inability of tribes to manage their own affairs.

“We’ve been living under this system for so long we’ve forgotten the underlying reasons for it,” he said. “Every other person in this country can control his own land, but we can’t. Now, we’re taking control of our destiny, and it makes me proud.”