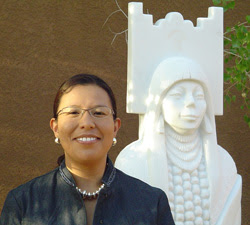 Diandra Benally is a leader who takes action.

The Shiprock resident has been involved with everything from American Indian health care and diabetes programs to emergency preparedness and the reform of Medicare and Medicaid.
And that’s just the tip of what this 29-year-old has taken on since graduating from college.
She’s also quite the attorney.

After just two years on the job at the Navajo Nation Department of Justice, Benally recently was named the Outstanding Young Lawyer of the Year by the State Bar of New Mexico.
“Our board looked well beyond Albuquerque and Santa Fe to find this degree of excellence and professionalism in other areas of the state, and we are pleased to have found it on the Nation,” said Joe Conte, the state bar executive director.

Benally was one of only 10 of the state’s 1,600 young layers to be nominated. To qualify, a lawyer must be younger than 36 and must have practiced law for fewer than five years.
San Juan County, and especially the Navajo Nation, should be proud.

Benally holds degrees from Dartmouth College and Arizona State University and is just the kind of role model our youth need to see making news.

Benally set her goal to become a lawyer long before she even entered middle school. She has stuck to her dream so that she can make a difference for those who follow.

What may be most impressive about Benally is that not only has she found success, but she’s giving back to her community. She has immersed herself in the issues when it would have been easier to take her success and run.

“Benally is conversant with the native population both on and off the reservation. She’s very in tune with what their needs are,” said Rebecca Tsosie, a law professor.

Benally doesn’t stop there. She realizes she is an example for youth and that they can learn from her experience.

“I hope I can provide guidance, support and mentorship to any student I meet,” Benally said.
That’s where the winds of change start.

Things only can get better for youth of the Nation and of the entire county when we have such leaders willing to take the hands of our youth and lead them to great opportunities.

We hope that many more on the Navajo Nation and in San Juan County will follow Benally’s lead.
And we hope there will be much more recognition to come her way in the future.