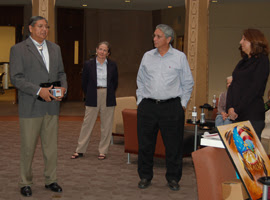 Gover bids farewell to law school:`This is what I’m supposed to do’

Colleagues, students and friends of Kevin Gover, a professor of the Sandra Day O’Connor College of Law and co-executive director of the American Indian Policy Institute at Arizona State University, honored him with symbolic gifts and fond congratulations during a farewell party on Nov. 26.

Gover, a former Assistant Secretary of the Interior for Indian Affairs, is returning to Washington, D.C., to accept an appointment as director of the Smithsonian’s National Museum of the American Indian, effective Dec. 2.

Gover, who will remain a professor at the law school on leave for the duration of his time at the museum, will be welcomed back with open arms whenever he chooses, said Patricia White, dean of the College of Law.

“I want to say how excited we are for Kevin and how proud we are of Kevin and, more importantly, how sad we are for ourselves that Kevin will be leaving,” White said. “Kevin’s presence here has been a wondrous thing for all of us. He has contributed to this school in innumerable ways, as a fabulous teacher and a wonderful mentor to lots and lots of students, and he has been particularly important to the students in the Indian Legal Program.”

One of them, Joe Sarcinella, a second-year law student, presented Gover with an acrylic painting from the Native American Law Student Association, which was made by Phoenix artist Joseph Wolveskill. “You are very important to us,” Sarcinella told Gover. “We’re very happy to have had the chance to study with you.”

Gover, who practiced law in Washington, D.C., and Albuquerque before serving as Assistant Secretary of the Interior for Indian Affairs, joined the College of Law in 2003.

“We didn’t come here with any thought in mind that this was a way station, or that we were just passing through, but rather with the expectation and hope that this would be a place where we would do something completely different, something that seemed worthwhile, important and noteworthy,” said Gover, who also is an affiliate professor in the American Indian Studies Program at ASU. “My hopes and my expectations were not only fulfilled, they were exceeded.

“It means a great deal to be accepted here, into such an elite, intellectual, remarkable family.” Complimenting his colleagues in the renowned Indian Legal Program, Gover said he was certain the program would continue to blossom, and he praised the American Indian Policy Institute as one of the most important such enterprises in the country.

Pat Mariella, the institute’s director, presented Gover with a plaque and thanked him for his leadership, while Eddie Brown, the institute’s co-executive director with Gover, gave him an ASU polo shirt to remind him of his academic roots.

“It’s been a real pleasure,” Brown said. “Kevin because the mastermind of many of the ideas that we developed over the last few years.”

Jacob Moore, tribal relations coordinator for the ASU Office of Public Affairs, gave Gover a Tohono O’odham basket, then joked, “We know he’ll have lots of artwork around him, so this is something to remember us by.”

Gover said his desire to continue helping Native people tell their stories led, in part, to his decision to accept the appointment to the Smithsonian.

“This museum is a place where we can really reshape Americans’ understanding of who Indians are, of who they were and who they’re going to be,” said Gover, who grew up in Oklahoma and is a member of the Pawnee Tribe. “And that’s heady stuff, that’s a big deal to me because there’s so much misunderstanding.”

He also said the new job “seemed like what I’m supposed to do now. I’m very hopeful that it won’t be too long that it seems I’m supposed to come back. I really do like it here, in no small part because of our students.

“I look forward to when I’m in my rocking chair, and I say, `Oh, yeah, that was my student.’ I know the contributions these students will make,” he said.