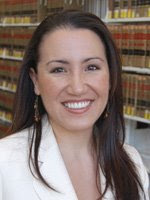 Breann Yoshiko Swann, an LL.M. student in the Indian Legal Program, will give a presentation on Aug. 28 in Tokyo as part of the United Nations University/UNESCO 2008 Conference on Globalization and Languages, which will explore the contribution of linguistic diversity and multilingualism to development and their value for dialogue, social cohesion and peace. Swann will speak on “Changing the Language of Industry: Setting Standards for the Protection of Indigenous Languages in the Workplace.” Swann’s presentation explores the role that language use in the workplace plays in preserving indigenous languages.
“Research suggests that, absent revitalization efforts, 155 of the approximately 175 extant Native American languages in the United States will die by the year 2060,” according to Swann’s presentation abstract. “The prognosis for the remaining indigenous languages in other parts of the world is, for the most part, equally grim.”
While there are some efforts to preserve indigenous language, those efforts are focused on education and domestic and social use, Swann writes. Meanwhile, industry and employers are moving to a largely monolingual global workplace. Swann argues that the presence of indigenous language in the workplace may be crucial to its survival and analyzes different instruments that could be used to protect language in the employment sphere. The conference is organized by the United Nations University, established by the United Nations, and the United Nations Educational, Scientific and Cultural Organization.
Swann is a licensed attorney practicing in the areas of federal Indian law and labor and employment law. She currently works for the Office of the General Counsel of the Salt River Pima-Maricopa Indian Community, where she provides strategic advice and counsel regarding various aspects of tribal governance. Her work with the Salt River Pima-Maricopa Indian Community focuses primarily on tribal labor and employment matters and the development of tribal ordinances and policies. Building upon her practical legal experience, she has concentrated her recent scholarship on the social and political ramifications of language policies and practices in the workplace. She received her J.D. from the University of Southern California and her B.A. from Yale University. She will receive her LL.M. in Tribal Policy, Law and Government from the College of Law in May 2009. Prior to entering the field of Indian law, she was a practitioner of labor and employment law in the Los Angeles office of Thelen Reid Brown Raysman & Steiner LLP.