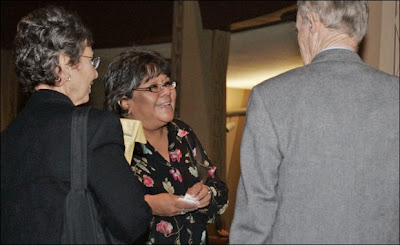 The first Native American appointed to the Arizona Board of Regents said she’s honored to serve on the board, but it comes with a great challenge. “It’s being a part of history, but it’s also a great responsibility to represent not only Native Americans but also rural Arizona,” said LuAnn Leonard, a member of the Hopi Tribe.

The Indian Legal Program at the Sandra Day O’Connor College of Law hosted a reception Wednesday to honor Leonard, who joined the board in March. Gov. Janet Napolitano chose to nominate Leonard in a push to find experienced leaders in education from counties with fewer than 800,000 people, Leonard said.

“When I got the call from the governor’s office … I knew that if I didn’t try and say yes to going forward with the nomination that we might miss an opportunity for Native Americans,” she said.
“Napolitano knew there had never been a Native American regent, and she wanted to change it.”
Leonard said she has made it her goal to increase awareness of Native communities at the state universities. She said she has invited President Michael Crow to visit her community next summer. NAU President John Haeger and UA President Robert Shelton have already visited. “It was really eye-opening to them,” she said. “Our way of life in rural communities is very different.”

Peterson Zah, former president of the Navajo Nation, said Leonard is an important addition to the board because of her experience in unique Native education systems. “They are not doing very well retention wise,” said Zah, who also works at ASU as an adviser on American Indian affairs. “They have a significant problem. They have unique problems only someone like Regent Leonard can identify.”

Zah said Leonard would be able to show her experience at the ABOR meeting Thursday, when regents are set to vote on a tribal consultation policy would require each university to designate tribal liaisons and submit annual reports regarding relations with Native American tribes. “Regent Leonard would be able to bring the regents’ attention to that [relationship],” he said.

Rebecca Tsosie, executive director of the Indian Legal Program, told Leonard her appointment is a great step forward for Native American education. “It was like a dream that someone like you could be able to represent our people,” she said. “We are in a time of transformation, but your leadership will lead us through.”

Ross Meyer, a student regent from ASU, said Leonard adds to the diverse spectrum of ABOR, which helps ensure accessibility to education and financial aid. “It’s great to get that perspective on the board,” said Meyer, a second-year law student. “She’s a great addition.”

Leonard said she is looking forward to being a part of shaping the future of the university system at Thursday’s ABOR meeting, but she would not comment on how she will vote on the tuition proposals.

To conclude the ceremony, members of the Indian Legal Program gave Leonard an ASU stationery set. Leonard said anyone attending the ASU-UA football game can expect to see her showing it off. “I’ll be flashing the ASU pen,” she said.

Reach the reporter at adam.sneed@asu.edu.